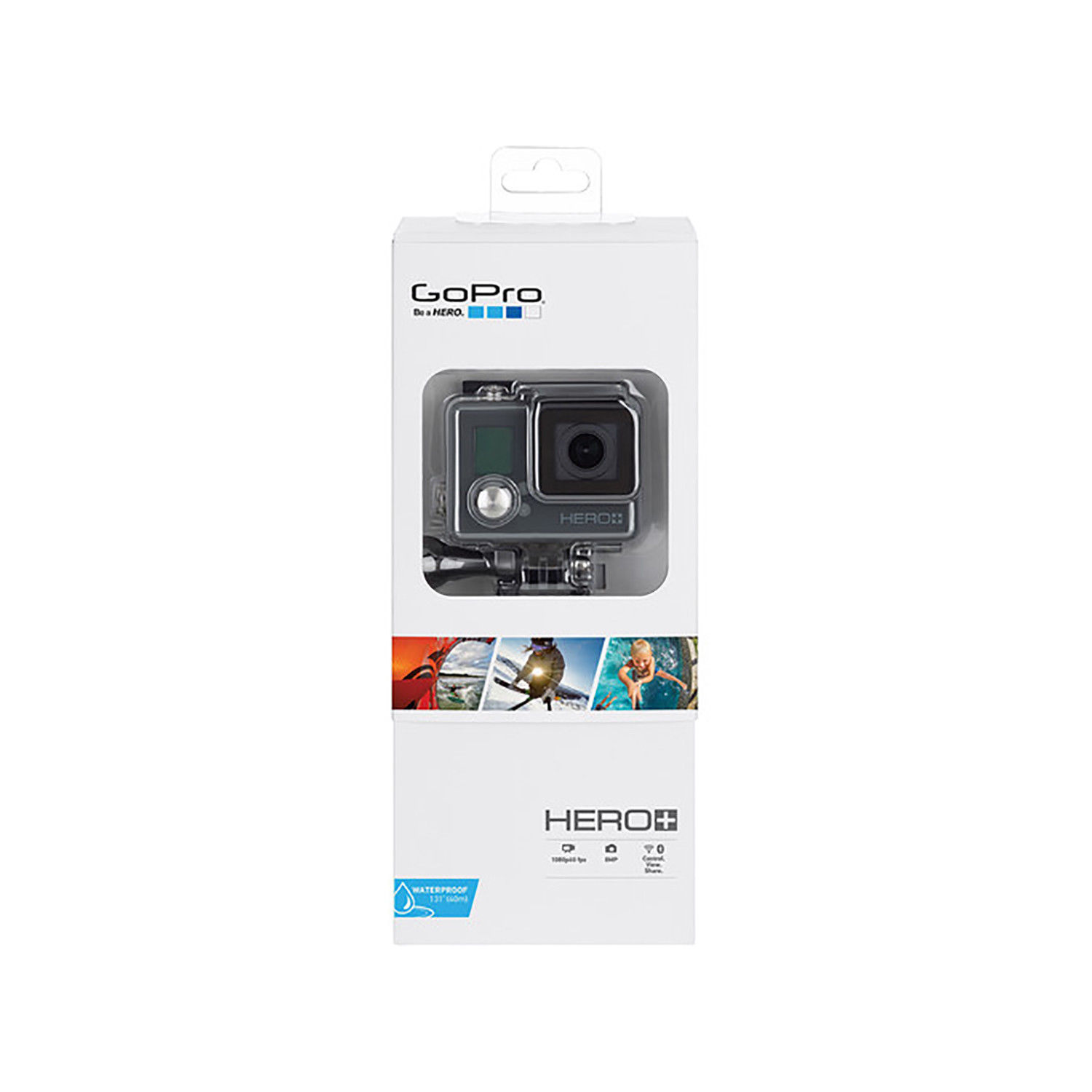 overview
x
x
x
See What Our Customer Say About Us

Excellent First Class Thank You A*****

The GoPro HERO+ is an entry-level GoPro option that captures immersive 1080p video at up to 60 fps and features built-in Wi-Fi connectivity. It also takes 8MP still photos in either single-shot, time-lapse, or 5 fps burst modes. For simplicity and ease-of-use, the camera is built-in directly into its housing, enabling underwater shooting at depths of 131′ without requiring a separate housing; simply secure the included Backdoor in place for a watertight seal. Using built-in Wi-Fi and Bluetooth, you can connect the camera to the GoPro Smart Remote or to the GoPro App on your mobile device for shot preview, complete camera control, and easy content sharing to social media sites.

In addition to its Standard Backdoor, a Skeleton Backdoor is included for use on dry land, which features cutouts for improved audio capture using the built-in microphone. Also included with the HERO+ are flat and curved adhesive mounts for surfboards, helmets, boats, and other smooth surfaces, as well as a quick release buckle that clips in and out of them.

Video and photos are recorded to microSD/SDHC/SDXC cards, with support for capacities up to 64GB. A USB cable is included for file transfer directly from the camera and charging the built-in battery, which provides around two hours of use on a full charge.

The HERO+ is built directly into a rugged housing that’s waterproof to depths of 131′ with the supplied Standard Backdoor attached. The housing is designed to survive dirt, sand, water, and nearly anything else you can throw at it.

The HERO+ offers immersive 1080p and 7p video at up to 60 fps for smooth motion capture and playback.

HERO+ is built directly into a rugged housing that’s waterproof to 40 m. It’s designed to survive dirt, sand, water and nearly anything else you can throw at it. Surf, snow, pets or kids—capture it all without a worry.

Power on your GoPro and start recording with the press of a single button. Quick Capture turns your GoPro into a one-button camera so you’re always ready to capture key moments. HiLight Tag lets you mark those moments during recording and playback so you can quickly find them later for editing or sharing using the GoPro App or GoPro Studio.

HERO+ features SuperView™, a GoPro-exclusive video mode that captures the world’s most immersive wide-angle perspective. It allows you to capture more of yourself and your surroundings in the shot—resulting in captivating, ultra-engaging footage of every adventure.

Let the camera do the thinking for you. Auto Low Light intelligently changes frame rates based on lighting conditions for optimal low-light performance, enabling you to move between bright and dark environments without having to adjust your camera settings.

we can only ship to the address we receive from PayPal, and is confirmed by PayPal as eligible for buyer-seller protection.All orders are usually dispatched within 1 working day of receiving clear payment.

We cannot accept personal or business cheques. We cannot ship to any address you give us over Email, phone or eBay message. When you make the payment please make sure you chose the correct address. Once made payment after we will not be able to change the shipping address.

If you have any questions please contact us before paying and we will be happy to help you.

Sometimes we need to contact you for additional verifications or, in cases where your PayPal address is unconfirmed. Please make sure you enter correctly your eBay phone number and email address are up to date

we will only ship your item/s to paypal verified addresses provided at the time you make payment. A valid phone number and email is required for all orders.

This is required for shipping and used for payment verification. This is an important security measure to avoid Fraud and protect your purchase.

Shipping is normally after one working day for express and standard deliveries after receiving cleared payment:- Please note that weekends and public holidays are excluded. We reserve the right to refuse shipping to any Unconfirmed PayPal address for high value items. You will be informed of this in due course.

We ship to the UK and the following EU member states:-

Shipping is via UPS standard / express service depending on which option you choose. We cant add special instruction notes for carrier.

A 30 day cancellation period provides UK and EU consumers with a cooling off period to assess their purchase. You have a right to cancel the contract without giving any reason. The cancellation period starts when we enter into a contract with you and will end 30 days after you have taken possession of the goods (or they have been accepted at your delivery address) we are supplying you.

In order to exercise your right to cancel you must inform us of your decision by a clear statement in writing* (we recommend by e-mail). We will acknowledge your cancellation and send you specific return instructions along with a unique returns number and a specific returns address which may differ from our registered office address. Please do NOT return anything until we have responded to your cancellation advice.

If there is any problem with your item or is faulty on arrival please email us or contact us on the phone before leaving Feed Back – we aim to please not disappoint and will do everything we can to resolve the problem to your satisfaction.

Returned items must be in the original un-used condition complete with all parts, original Packaging, foam,plastic wrapping etc. Faulty items are expertly checked on return and if item is found not to be faulty by our technicians we will return said item to you. In this instance you will be liable for any return carriage.

All product are BRAND NEW and this item comes with 1 year Seller warranty , All warranties are provided directly by Tronixcomputers

Full Warranty with replace or repair guarantee.Covering manufacturing defects only Tronixcomputers offers free pick and drop service all over EU

All items are accessed by our professional team of technicians We only use approved repair centers for all warranty repairs.In the event of any problem or issues within your warranty terms please contact us we can arrange to return your item, and repair or exchange and return the item to you.

Tronixcomputers warranty also cover DOA (damage on arrives) if your item arriver faulty or damage. In the unlikely event you experience a problem with your item when it arrives we will replace item straight away or issue a full refund.

Our customer satisfaction our top of priority. Tronixcomputers aim to provide a pleasant shopping experience for all our customer, we commit to providing extraordinary service before and after you purchase from us